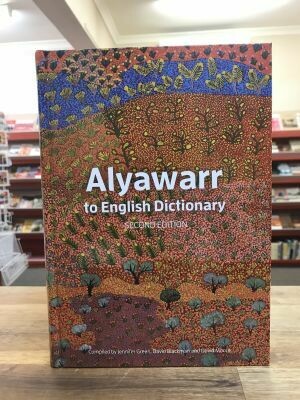 Alyawarr is the name of the language and people whose traditional lands lie in the Sandover River region of northeastern Central Australia, between the Barkly Highway and the Plenty Highway. Many Alyawarr people live on their traditional lands in this region, while others live in the towns of Ilperrelhelam (Lake Nash), Camooweal, Mt. Isa, Amameny (Urandangie), Tennant Creek and Alice Springs. There are about 1,800 fluent Alyawarr speakers.

Alyawarr belongs to the Pama‑Nyungan family of Australian languages. It is one of the Arandic group of languages that includes Eastern and Central Arrernte, Western Arrarnta, Lower Arrernte and Pertame, Central and Eastern Anmatyerr, and Kaytetye.

The first edition of the Alyawarr to English dictionary was compiled by Jennifer Green in the early 1990s from 90 hours of tape recordings, and field notes. Approximately 70 Alyawarr people were involved, including many senior people with deep knowledge of Alyawarr language and culture.

This expanded Second Edition has benefited from the long‑term associations of David Blackman and David Moore with Alyawarr communities, and from their on‑going translation, interpreting and linguistic research in the Alyawarr region since 1992. This new edition has also drawn from lexicographic research on other Arandic languages.