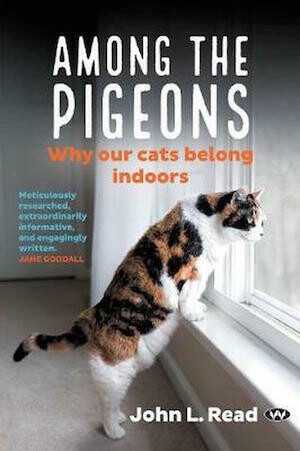 Among the Pigeons: Why our cats belong indoors by John L. Read

During the last century, global domestic cat numbers rocketed past 200 million, along with a surge in cat diseases and numbers of feral cats and sick, injured and malnourished cats. Cat shelters are overflowing. Hundreds of thousands of cats are euthanised every year by despondent animal welfare workers. Misplaced sentimentality, sometimes promoted by corporate greed of cat food companies, has exacerbated this situation through promoting irresponsible feeding of strays.


Ecologist and author John Read has travelled the world consulting cat experts and collating the most recent science. In Among the Pigeons he balances the allure of indoor cats with the animal welfare, human health, and conservation issues they create when allowed to roam. But he also presents solutions, from breeding ideal indoor pet cats to development of humane and targeted tools, to control feral cats.

In striking parallel to the repercussions of human-induced climate change, warnings about the damage wrought by free-ranging cats have been largely denied or overlooked. But we ignore these issues at our peril. For our own mental health and endangered wildlife worldwide, time is running out.

'Essential reading for all those on either side of the cat debate.' - James Valentine, ABC Sydney

'Absorbing and compelling, Among the Pigeons is wonderfully written and a great read - indeed should be a required read. It will dramatically change public understanding of cats and how we should best relate to them.' - Professor Thomas E. Lovejoy, Virginia

'With intelligent and engaging stories, Among the Pigeons explores the consequences of domestic cat introductions to new ecosystems across the globe - and the important lessons necessary for a more sustainable future.' - American Bird Conservancy

'Full of personal vignettes, Among the Pigeons is written in an engaging and casual style ... The scientific data laid out ... clearly demonstrate that cats are having an overwhelmingly detrimental effect on the fauna of Australia. Among the Pigeons shows the value of a solid scientific underpinning for resolving societal disputes.’ - Jonathan B. Losos, Science

'This fascinating book offers a telling insight into . . . the enigma of the domestic cat. How can a cuddly, purring household pet be transformed into a sleek, feline killing machine once it steps outside the threshold and makes the outdoors its domain?' - Dave Rose, Great Australian Outdoors
Save this product for later
Display prices in: AUD