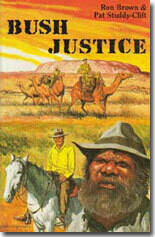 Ron Brown tells of his experiences in the Red Heart of Australia, where he was known and loved as "Brownie of the Finke".

His stories cover the transition period from 1945 to 1952 when he was the last of the Central Australian Police Camel Patrolmen emerging into a new age. As a lone representative of the white man's law and mediator in many a tribal feud, he patrolled a police district larger than the state of Victoria.

"Brownie" tells of the time he was almost speared to death; of his strong bond with his loyal blacktracker Mick; freely discusses relationships between and among Aborigines and Whites; honours the bushmen and their women, records with respect the folklore of the Aborigines; remembers the missionaries, prospectors, contractors and drovers; and recollects the fear of untimely death whether from thirst, snakebite, accidents, murder or suicide. "Brownie" combines all this with real Australian humour born out of adversity. His early days confirm "that to live fully is to live dangerously".

In 1952, "Brownie" returned to the family cane farm on the Tweed River in northern New South Wales to an active retirement pursuing his interests of history, maritime museums, preservation of ancient artefacts, reading, writing, classical music and opera.

Like Abou Ben Adhem, he loves his fellow man.