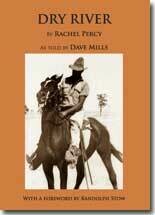 Dry River by Rachel Percy As told by Dave Mills

David Mills’ biography, Dry River, is a richly detailed account of working life in the Australian Outback in the last days of the old stockroutes and packsaddle cattle camps. An extraordinary story of an ordinary bloke.

Dry River is a vivid account of one man’s pursuit of his dream:

Rachel Percy, born in Geraldton, Western Australia, in 1930, spent most of her youth on Murchison sheep stations near Meekatharra and Mullewa. She has written many radio talks and other works for the A.B.C. about station life and the inland country she knew so well. In 1980 she was the co-author of To Fight the Wild, Rodney Ansell’s account of his adventure on the Fitzmaurice River in the Northern Territory which, after five editions, is now out of print.

Although Rachel has lived in the hills near Perth for some years, she has never lost her love for the bush and is very aware of the changes taking place to its way of life.

David Mills (1936-1991). A Geraldton farm boy who left the hills of home to follow a hard road that was to lead him over most of outback Australia,

“I’d got into the game of droving just in time to wave it goodbye, the way things turned out. A bit ironical, eh?”

Randolph Stow (1935-2010) also born in Geraldton, was one of Australia’s most internationally respected poets and novelists. After many years in England, he looked back and remembered how a youthful meeting with Dave (Darby) Mills led to the creation of his novel Tourmaline.