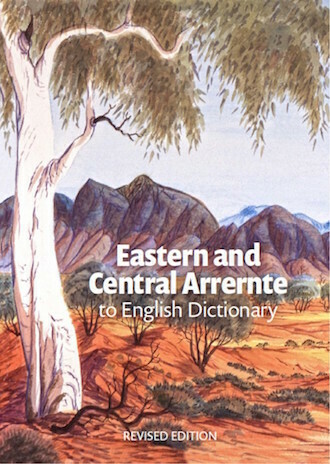 Eastern and Central Arrernte are spoken by about 2000 people in Mpartntwe (Alice Springs), Ltyentye Apurte (Santa Teresa) and other communities in central Australia. For Arrernte people, their language links them with their family, their country and their dreamings.

The Eastern and Central Arrernte to English Dictionary was a major community effort that involved almost one hundred people and a dozen organisations. It was created by asking people about Arrernte words, who used them, what they meant, and getting short examples. We also used examples of written Arrernte, and we recorded stories and discussions about words.
All this information was brought together, the detailed meanings were worked out, the entries were prepared, and all words were checked to make sure they were suitable for this dictionary. We are truly fortunate that the two compilers of the first edition, Veronica Dobson and John Henderson, were able to refine the entries and add some new ones to create this Revised Edition.
This edition includes:
Over 6000 entries and subentries with definitions and extensive example sentences
An English to Arrernte word finder list
A guide to pronunciation, grammar and the writing system
An introduction to Arrernte family and society
A wide range of illustrations
For pronunciation guidance see: https://arrernte-angkentye.online/