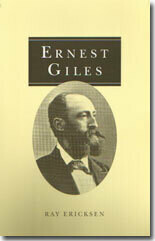 Between 1872 and 1876 Ernest Giles led five expeditions into Australia's western interior, during which he discovered more land than any other explorer of this continent.

Fiercely individualistic and driven by a desire 'to be the first to penetrate this region', Giles proceeded without official support. Despite initial setbacks and the seemingly impenetrable wilderness that confronted him, Giles never weakened in his purpose or his love of exploration. This was partly due to his being a romantic - any situation, even the most desperate, was an 'experience', capable of stimulating his poetic imagination and his talent for writing.

Ray Ericksen has travelled through most of the country of Giles' expeditions. This familiarity with the interior, together with new information unearthed in his extensive research, forms the basis of his approach to Giles' life - a life which, after a long term of preparatory experience in the back country of western New South Wales, suddenly flowered in an astonishing productive four-year period.

Ericksen focuses on this period, presenting a penetrating study of the explorer in action. The main stages of the expeditions are unravelled and analysed, revealing the mettle of the man as he pits himself against the forbidding desert expanses, weighing up chances and frequently dicing with death. Throughout, Giles' performance in the field is closely compared with the work of his contemporaries - Gosse, Warburton and Forrest - and of their predecessors.

This definitive study of Giles is also a stimulation contribution to the history of Australian exploration.