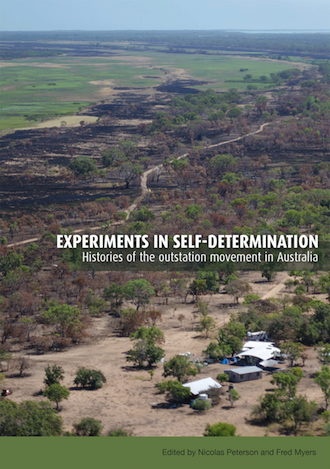 Experiments in self-determination: Histories of the outstation movement in Australia. Edited by Nicolas Peterson & Fred Myers (Print on demand - 30 day wait if not in stock)

Outstations, which dramatically increased in numbers in the 1970s, are small, decentralised and relatively permanent communities of kin established by Aboriginal people on land that has social, cultural or economic significance to them. In 2015 they yet again came under attack, this time as an expensive lifestyle choice that can no longer be supported by state governments. Yet outstations are the original, and most striking, manifestation of remote-area Aboriginal people’s aspirations for self-determination, and of the life projects by which they seek, and have sought, autonomy in deciding the meaning of their life independently of projects promoted by the state and market. They are not simply projects of isolation from outside influences, as they have sometimes been characterised, but attempts by people to take control of the course of their lives. In the sometimes acrimonious debates about outstations, the lived experiences, motivations and histories of existing communities are missing. For this reason, we invited a number of anthropological witnesses to the early period in which outstations gained a purchase in remote Australia to provide accounts of what these communities were like, and what their residents’ aspirations and experiences were. Our hope is that these closer-to-the-ground accounts provide insight into, and understanding of, what Indigenous aspirations were in the establishment and organisation of these communities.


This volume will be a great addition not only to the origins and history of outstations, but in light of the closing of over 100 Aboriginal communities in Western Australia, it should be a required bedtime reading for all politicians across Australia. The contributors do not simply concentrate on the so-called outstations movement of the 1970s, but rather help the reader understand why in the 1930s, ‘40s, ‘50s, and ‘60s, Aboriginal people moved away from cattle stations, missions and settlements to reconstruct their moral compass in settings which made more contemporaneous sense, not only to them but often to the whites who were there as well. —Professor Francoise Dussart, University of Connecticut.
Save this product for later