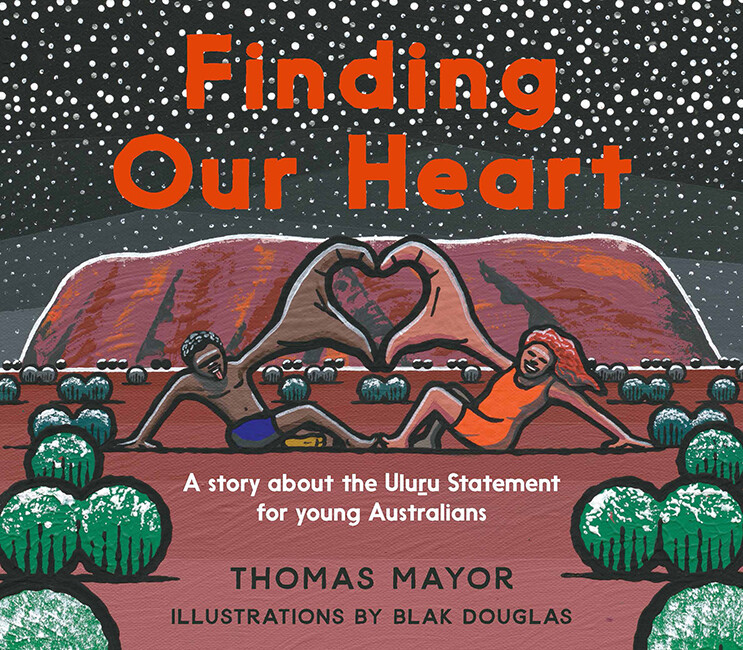 Finding Our Heart - A Story about the Uluru Statement for Young Australians by Thomas Mayor / Blak Douglas (illustrator) - this title is currently on back order shipment will be delayed.

’When we all came together at Uluru, we invited all Australian people to accept our voice and culture as a gift.’

Can you help us find the heart of the nation?

A book about understanding Australia’s past, so we can have a shared future.

Thomas Mayor is a Torres Strait Islander man born on Larrakia country in Darwin. As an Islander growing up on the mainland, he learned to hunt traditional foods with his father and to island dance from the Darwin community of Torres Strait Islanders. In high school, Thomas’s English teacher suggested he should become a writer. He didn’t think then that he would become one of the first ever Torres Strait Islander authors to have a book published for the general trade. Instead, he became a wharf labourer from the age of seventeen, until he became a union official for the Maritime Union of Australia in his early thirties. Quietly spoken in character, Thomas found his voice on the wharves. As he gained the skills of negotiation and organising in the union movement, he applied those skills to advancing the rights of Indigenous peoples, becoming a signatory to the Uluru Statement from the Heart and a tireless campaigner. Following the Uluru Convention, Thomas was entrusted to carry the sacred canvas of the Uluru Statement from the Heart. He then embarked on an eighteen-month journey around the country to garner support for a constitutionally enshrined First Nations voice, and a Makarrata Commission for truth-telling and agreement-making or treaties. Thomas’s journey continues, both in person and through the pages of this book. The book is his gift to the campaign for Voice, Treaty and Truth. Like the Uluru Statement from the Heart, he hopes that all Australians will accept it.

Born Adam Douglas Hill to an Aboriginal father of the Dhungutti people and an Irish-Australian mother, Blak Douglas lives and works in the Sydney suburb of Redfern. He is trained in illustration and photography, and became a self–taught painter. His artistic style is influenced by the study of graphic design and his focus on social justice. His works have appeared at the National Gallery of Australia, the Art Gallery of NSW, National Maritime Museum, National Museum of Australia, Australian Museum, Taipei Museum and the Aboriginal Art Museum in Utrecht, Netherlands. He is a successive finalist in the Telstra National Aboriginal and Torres Strait Islander Art Awards, Parliament of NSW Aboriginal Art Prize and Mosman Art Prize, and an Archibald Prize finalist in 2015, 2018 and 2019. Douglas is also a classically trained didgeridoo player, and has performed nationally and internationally accompanying the likes of Christine Anu, Emma and Casey Donovan, Jessica Mauboy, Jenny Morris, Jane Rutter and Peter Sculthorpe. He has also performed at the Deadly Awards, the Rugby World Cup opening ceremony, Yabun Festival and the welcome for Nelson Mandela.