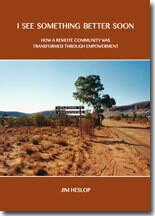 This is an important study of early teaching in the remote community of Warakurna.

This is a book that I really did not want to write because I had hoped that the journey of community-school transformation and empowerment that was commenced in 1991 in Warakurna would have gone much further and it would have dwarfed the tentative steps that were made at that time.

Unfortunately, it may be argued that the empowerment of Aboriginal people over their school Warakurna or anywhere in the Ngaanyatjarra Lands of Western Australia has probably gone backwards. I have therefore written this book as an historic reminder to readers of what can be achieved by people who have a mind to work cooperatively and in humility towards achieving community aspirations.

My book is a reminder that the 'brush shelter' schools that introduced Western schooling services to the Ngaanyatjarra Lands communities (known then as the Homelands) in the 1970s were based on the initiative of the Aboriginal people, the yarnangu. It suggests that the capacity for radical change and improvement in providing schooling under community authority in the region has not been lost. Barriers that prevent it from re-emerging however need to be removed. An undocumented cooperative history between non-Aboriginal teachers and Aboriginal people is at the foundation of the history of schooling in the Ngaanyatjarra Lands in the 1970s but by the time I returned to the Lands in 1992, high fences surrounded the schools and teacher homes and the schools looked like Western ornaments within the community, not valued, and of little relevance to the community.

Shortly after my return, I sat with an elderly man in Warburton whom I had known for some time. We saw a non-Aboriginal person walking in the distance and I asked him if he knew who the person was. He looked up and said, "I don't know. It must be a teacher". The reaction of that man showed that non-Aboriginal teachers were not counted as members of the community. They did not mix with the yarnangu and the yarnangu saw no point in mixing with them.
On my first day teaching at Warakurna in 1991, I saw more children playing on the swings adjacent to the school than we had in the classrooms. A tradition had developed that the children did not have to come to school and, if they did, they had to be picked up in the school vehicle, showered at the school, be given a uniform to wear, and fed breakfast, morning tea and lunch. Much of the school day was spent doing these things.

I reintroduced myself to the community members, most of whom I had known a decade earlier and we started a conversation based on the memories of what we achieved in the 1970s. I also introduced my wife and children because I wanted them to see that Warakurna was going to be my home and not a temporary dwelling that was a more a place to leave rather than enjoy.

I also wanted the people to know that I respected them as parents who could raise their children and care for them.

A third assumption was that teachers had to work with the children as they would any child and expect high learning outcomes. The day had to be structured as it would anywhere else and so trips 'out bush', playing games, movies, and extended recesses were limited to end of term treats. Intensive numeracy and literacy lessons were conducted and children even had reading books to take home in book bags.

Student numbers increased significantly because the teachers were committed to providing the best learning experiences possible according to the assumption that the children could learn and achieve as well as any child as long as we employed appropriate strategies. Teachers saw themselves as researchers and constantly inquired into different ways of addressing the learning needs of children.

The context of this book was that Warakurna was my home, the people were my friends, community members had authority over their school with teachers working under delegated authority, students were expected to come to school and learn, and parents were to ensure that their children were well looked after and families were welcome in the school.

In view of that context, expecting the community to have authority in the school and to plan for its future was a natural next step.

When I look back on the journey, I have no regrets and my family still has strong feelings towards the people we worked with. What we went through was easy because we were with friends.