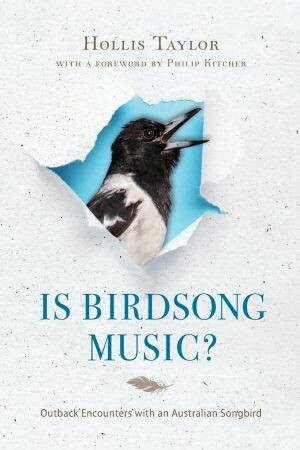 Is Birdsong Music? Outback Encounters with an Australian Songbird by Hollis Taylor

Hollis Taylor is someone rare and courageous, a pioneer. No one has given themselves so fully to the quest to understand bird song as music. Her book Is Birdsong Music? pursues its question with such intelligence and care that her answer is altogether convincing." ~Tim Low, author of Where Song Began

How and when does music become possible? Is it a matter of biology, or culture, or an interaction between the two? Revolutionizing the way we think about the core values of music and human exceptionalism, Hollis Taylor takes us on an outback road trip to meet the Australian pied butcherbird. Recognized for their distinct timbre, calls, and songs, both sexes of this songbird sing in duos, trios, and even larger choirs, transforming their flute-like songs annually. While birdsong has long inspired artists, writers, musicians, and philosophers, and enthralled listeners from all walks of life, researchers from the sciences have dominated its study. As a field musicologist, Taylor spends months each year in the Australian outback recording the songs of the pied butcherbird and chronicling their musical activities. She argues persuasively in these pages that their inventiveness in song surpasses biological necessity, compelling us to question the foundations of music and confront the remarkably entangled relationship between human and animal worlds. Equal parts nature essay, memoir, and scholarship, Is Birdsong Music? offers vivid portraits of the extreme locations where these avian choristers are found, quirky stories from the field, and an in-depth exploration of the vocalizations of the pied butcherbird.