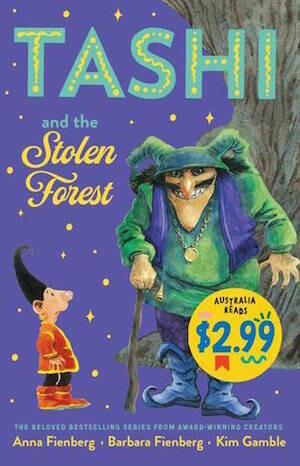 Tashi and the Stolen Forest by Anna Fienberg and Barbara Fienberg, Illustrated by Kim Gamble

In this Australia Reads exclusive story, can Tashi use Much-to-Learn's spell to outsmart the Wicked Baron and stop the old forest from disappearing?

OVER ONE MILLION COPIES SOLD!
'Why, that interfering little worm, someone ought to step on him!' the Baron hissed to Tiki Pu. I guessed he was talking about me. 'Well, never mind if he blabs about the wood,' he added, cheering up. 'I'll just lie, and say I had nothing to do with it. You, however, must pay Much-to-Learn a visit. Steal his secret spell.'
Jack loved it when Tashi told his stories. Today Tashi was telling about the time the old forest disappeared, and Much-to-Learn was in danger of disappearing with it! And then the whole village was threatened ... Could magic sand and a certain spell help save them all? Only someone as clever as Tashi could find a way to outwit the Baron - and solve the mystery of the disappearing trees. An Australia Reads exclusive story.
ACCLAIM FOR TASHI
First published in 1995 and has now achieved classic status with sales of over one million copies.
'All children should meet Tashi. He can be their mentor on the road to reading, feeding their imaginations with fantastic stories. The Tashi stories have the evergreen qualities of classics.' Magpies
'The Tashi stories are some of my all-time favourites: a world within a world and a magical place for children to lose themselves in.' Sally Rippin, bestselling author of Polly and Buster and Billie B. Brown
'I read my kids Tashi - it's this story that they love.' Angelina Jolie
Save this product for later
Display prices in: AUD