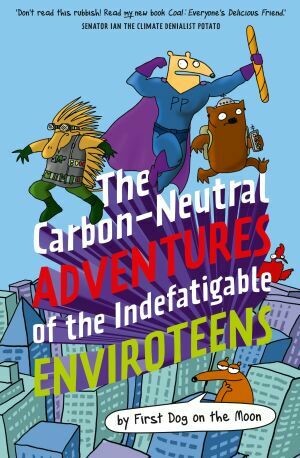 A hilarious, illustrated and environmentally-friendly adventure from the country's enormously popular and only marsupial Walkley award-winning cartoonist and soon to be beloved children's author.

Meet our superheroes:
- Binky, aka The Monotreme!
- Worried Norman, once bitten by a radioactive croissant and now Pastry Person!
- Letitia, an occasionally bossy science-wombat and genius inventor!

Together, they are the EnviroTeens and they are about to get very, very angry. Singleuse Plastic Brendan may have an evil plan to destroy all the world's turtles with his dastardly tur-tele-pooter but, believe it or not, there is something even more sinister than an angry plastic bag on a garbage island in the middle of the ocean ... Climate change! Oh no! The EnviroTeens will do anything to stop this impending disaster: scale slippery volcanoes, scurry through forests full of poisonous armpit monsters, even meet Senator Ian, the Climate Denialist Potato. But can three teenagers and a chicken save the whole world? Why not, nobody else is! Maybe they are in with a chance? I can't look, it's too exciting!

A hilarious graphic novel about a group of teens who are determined to clean the planet and clear the air. A proportion of the publisher's profits will be donated to School Strike 4 Climate Australia.

'I loved the book and found it entertaining and humorous yet still informative. It's well written and educational ... The muffin recipe is an extra bonus too. Good job. Great writing and illustrating.' Clementine, 11 years old

'Totally hilarious. I loved it. And the environmental message is what all my friends and I want to see adults fighting for. You are a good adult ... Gold star for you.' Maggie, 12 years old

'This whimsical, fun book will be fully enjoyed by children who are fans of Dav Pilkey's Dog Man books or Andy Griffiths and Terry Denton's Treehouse series. It is also a great way for parents to inspire conversations with their children about the complexities of contemporary environmental politics.' Books+Publishing