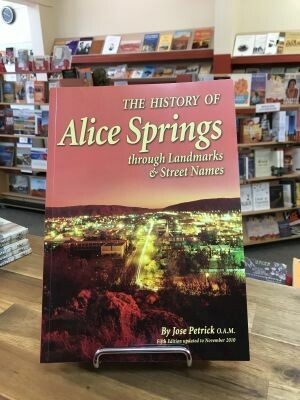 Due to popular demand and the sell-out of the four previous editions, Jose Petrick has updated her novel history book to November 2010. The fifth edition contains two new streets in Ridges Estate, Larapinta: Teague Crescent and WRight Place.

The book contains more than 600 entries. Included are nearly 40 new street names and some place names. Due to requests by coach-drivers and tourism industry personnel, 70 place names of mountains, gaps, rivers and towns have been inserted. Aboriginal street names have been included. Featured also are 40 buildings, bridges, parks and pavilions named after people, who apart from their own work, spent hours doing voluntary work to help establish the town.

The Eight Centres of Mainland Australia have been inserted at the beginning of the book due to travellers' requests.

Read how explorers and overland telegraph line personnel braved the elements and harsh land, and in their wake came miners, pastoralists, blacksmiths, missionaries, nurses, doctors, the Afghans, artists and pilots, many of whom then stayed.

Residents find this an excellent reference and entertaining book of humour, drama, and daily life fo their town, while tourists from all over the world have requested copies of Jose's book.