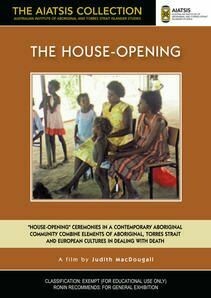 The House-Opening - Film by Judith MacDougall

"House-opening" ceremonies in a contemporary Aboriginal community combine elements of Aboriginal, Torres Strait and European cultures in dealing with death.

When Geraldine Kawanka's husband died, she and her children moved out of their house. In earlier times, their bark house would have been burnt, but today a "house-opening" ceremony has evolved, creatively mingling Aboriginal, Torres Strait, and European traditions in order to deal with death in the context of new living patterns in the Aboriginal community of Aurukun, on the Cape York Peninsula, north Queensland.

This beautifully observed documentary shows both the preparations for the ceremony and then the elaborate event itself, involving ritual, dancing, music, and a big feast that not even a sudden drenching tropical storm can disrupt.

Narrating the film herself, Geraldine Kawangka expresses her feelings about the gathering of family members, explains the relationships between old and new traditions, and finally examines her feelings about returning to her house after the ceremony is over. She talks about how the ceremony is essential as a way to teach young people about traditional values and customs, and to give them a sense of belonging to a huge extended family: "if our children lost these ceremonies, children wouldn't know who they are or where they come in".

Ronin Films wishes to advise Aboriginal and Torres Strait Islander people that this film may contain images and voices of deceased persons.