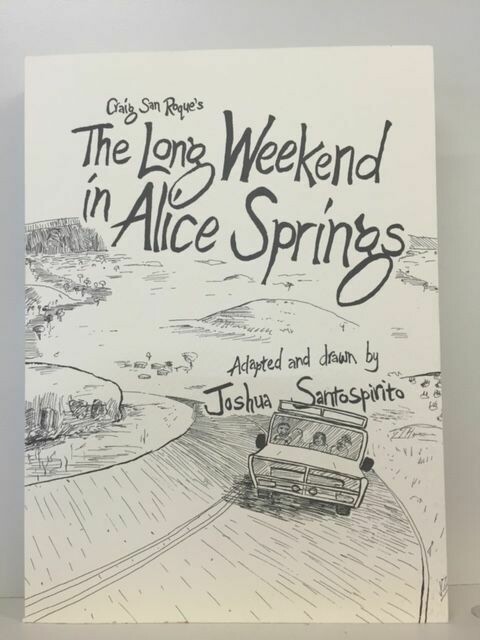 The Long Weekend in Alice Springs by Craig San Roque, adapted and drawn by Joshua Santospirito

The Long Weekend is the cult favourite graphic novel, adapted from an essay that explores the Jungian concept of the cultural complex,; and idea about group behaviour that was left largely unexplored until very recently in the academic world.

Craig San Roque, the author the original essay, acts as narrator throughout a long series of poetic thoughts and places. Over the course of a long weekend in the central Australian desert town of Alice Springs he grapples with an analysis of his own culture and the pain which it intentionally and unintentionally inflicts upon other cultures.

Moving, challenging and dangerous, The Long Weekend is a haunting comic, both shockingly funny and supremely uncomfortable to read. It's images linger with you after you've placed it upon your bedside table, turned off the lamp and settled into a restless sleep.

Joshua Santospirito read the essay A Long Weekend in Alice Springs whilst living and working as a psychiatric nurse in Central Australian Aboriginal communities. It was originally contained in a collection of essays in The Cultural Complex - contemporary Jungian Perspectives on Psyche and Society, edited by Tom Singer published in 2004 by Routledge.

At the time of reading, Josh found it very useful for reframing all of the seeming chaos around him. In 2007, as a form of cathartic meditation on the world, Josh began to draw parts of the essay into comic form which slowly became a much larger task and a labour of love.