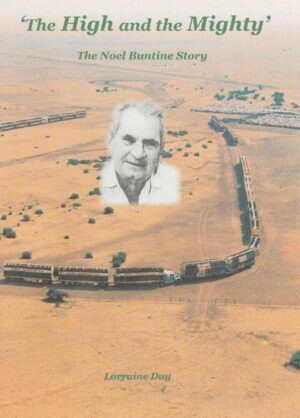 The high and mighty: the Noel Buntine Story by Lorraine Day

When Noel Buntine first arrived in the Northern Territory in 1950, he was told he was not qualified to hold a responsible government position … but that didn’t stop him pioneering road transport of livestock in the Top End and the Kimberley, long before there were roads … and, with persistence and determination, went on to build a multi-million dollar trucking empire that traversed more than half of the continent, from Geraldton in Western Australia across to Queensland and New South Wales. The success of his business was based on trust, integrity and down-to-earth loyal drivers and support staff.

Starting out with one truck, named ‘The High and the Mighty’, Noel Buntine pioneered a new era in cattle transport in the Top End. Within 20 years, his enterprise, Buntine Roadways, was operating the largest cattle-carrying buyisiness ibn northern Australia. Noel’s honesty and fairness in dealings earned ghuim the accolades synonymous with the name of his first Mack truck. He reached his operational peak through hard work, determination and trust.

Synonymous with cattlemen were horses, and Noel found a common interest which he came to love with a passion, leading him to breeding and owning several successful racehorses including three Darwin Cup winners and an entrant in a Melbourne Cup.

'Great people do great things. Noel Buntine developed a business that took over from the droving days and transformed the road transport industry and the movement of cattle across northern Australia.

Noel Buntine had humble genius and great perception as he carved out the largest slice of Australian road train history.

I read the Buntine story and felt pain at the loss of a great friend and a Territory hero.’

– Roger Steele, former Member of the Legislative Assembly in the Northern Territory for 12 years, including five years as Tourism Minister.