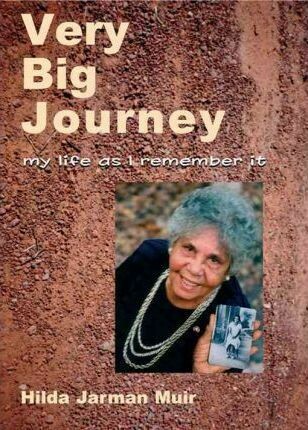 Very Big Journey: My Life as I Remember It by Hilda Jarman Muir

'When that good old horse took me away from Borroloola on the long journey to Darwin, it changed my life forever. I lost my true inheritance, my ancient language and the culture and loving companionship of my Yanyuwa people…I stopped being an Aboriginal girl and became a half-caste girl. From someone who’d had so much, I was now someone who had nothing, with no past and an unknown future…'

Hilda Muir was born on the very frontier of modern Australia, near the outback town of Borroloola in the Northern Territory in about 1920.

Her early life was spent roaming the Gulf Country on foot, hunting and gathering with her family. Her mother was a Yanyuwa person, and so was Hilda. Known to the clan as ‘Jarman’, it mattered little that her father was an unknown white man. This small girl had a name, a loving family, and a secure Aboriginal identity.

Very Big Journey tells of Hilda’s bush childhood, and her forced removal from a loving family to the rigours of life in the Kahlin Home for half-caste children. Hilda grew up to marry the love of her life, Billy Muir, and then had to learn to deal with the demands of a growing family and evacuation to Brisbane during the Second World War. Back in Darwin, and after the devastation of Cyclone Tracy, Hilda struggled to find her place in the world again.

In 1995, Hilda Muir was one of those chosen to present a writ to the High Court on behalf of her fellow stolen-generation, asserting that the removals were illegal as well as immoral. In 1997 the writ was rejected by the High Court.

In 2000 Hilda finally travelled back to her Yanyuwa land and was recognised as an owner and custodian of that country.