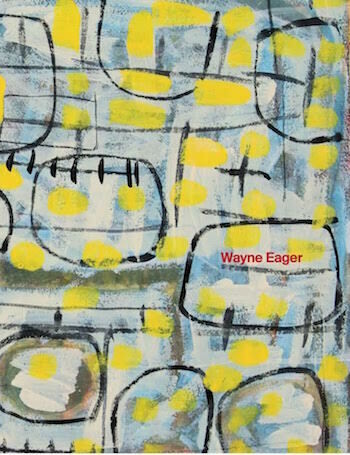 A review by Chips Mackinolty.

Wayne “Iggy” Eager—long time central Australian artist—started his career more than a decade before the absurdist film, and has a hell of a lot more to say through his visual art. For the first time we can see his work over the 30 years he has worked as an artist since his arrival here in 1990 in the newly released retrospective of his work here, Wayne Eager. We’ll get to see the work in the flesh in March next year when it gets to Araluen, but this book gives us a fabulous sneak preview of the coming exhibition.
Iggy’s work can broadly, but not exclusively, be described as abstract but there’s more to it than this. There is always a fierce sense of “place” in his work. For example, his early works in the Kakadu region—ones I’d not seen before—are instantly sensed as being entwined in the dry tropical, in stark contrast to his works that are deeply embedded in our desert environment here. At times lyrical, at times harsh, they are always about place.
The accompanying essays in the book based on the exhibition, Bitumen and Dirt—Wayne Eager, 30 years in the Territory—give important insights into the work (as opposed to the “it’s all about me” writings of too many art critics). They include words from John Kean, well known here from his days at Papunya Tula; curator and writer Kirsty Grant; and a great overview from leading art historian, Sasha Grishin. This is wrapped up by the exhibition’s curator, Kellie Joswig.
Save this product for later