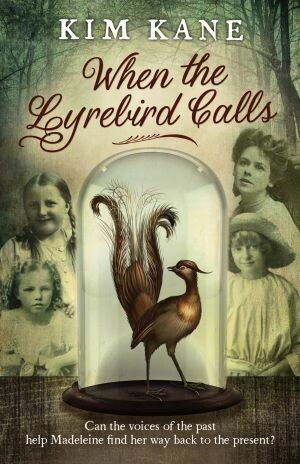 When the Lyrebird Calls by Kim Kane

A time-slip novel in which Madeleine finds herself transported back to 1900 Australia, where she befriends a family of girls and is witness to a family secret and a family tragedy.

When Madeleine is shipped off to stay with her eccentric grandmother for the holidays, she expects the usual: politics, early-morning yoga, extreme health food, and lots of hard work. Instead, Madeleine tumbles back in time to 1900, where the wealthy Williamson family takes her into their home, Lyrebird Muse. At a time when young girls have no power and no voice, set against a backdrop of the struggles for emancipation, federation and Aboriginal rights, Madeleine must find a way to fit in with the Williamson family's four sisters - beautiful, cold Bea; clever, awkward Gert; adventurous, rebellious Charlie; and darling baby Imo - as she searches desperately for a way home. Meanwhile, the Williamson girls' enchanting German cousin, Elfriede, arrives on the scene on a heavenly wave of smoke and cinnamon, and threatens to shatter everything...

'I found myself magically transported to a time gone by...This is a novel about feminism: about where we have been and where we are now. Written with elegance, humour, intelligence and originality, When the Lyrebird Calls is as precious as the lyrebird itself.' SOFIE LAGUNA, Miles Franklin Literary Award winner

'This is a beautiful story and I am so proud to have the Wurundjeri character of Percy involved.' AUNTY JOY MURPHY, Wurundjeri Elder